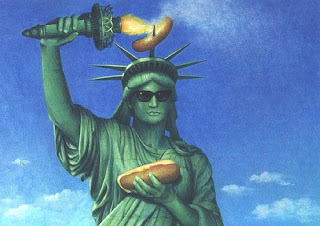 I was excited last week when I got an invitation to a party over at America’s house. For one thing, I was looking forward to seeing what the new place looked like. She has lived in a LOT of houses, over the years, and some of them you wouldn’t wish on Antarctica.

Not like Antarctica was invited, of course. Everyone knows if you ask Antarctica anywhere she just starts up with the business. Oh, my ice sheet is melting, oh I keep shedding chunks of my shelf, blah blah blah. Whenever I see Antarctica, I just want to say, girlfriend: you’re a wreck.

When I first met America, she was living in a teepee. Seriously. You should have seen the clothes. Beads and fringe and feathers. She was like, I’m going over to the Pilgrims’ house! And we were like, You’re wearing that?

Then she moved in with England for a while, but surprise, surprise: they had this BIG blowup. After that, she moved out west. This was a very difficult period, and when I say difficult I mean: chaps and leather. Ten gallon hats. It was rough.

This was when I lost touch with America for a while, which I feel bad about, but then you know the old saying: History is what happens to you while you’re busy making other plans.

So imagine how delighted I was when I heard she’d been to Europe—not once but twice! Apparently there was this big crisis over at Germany’s house and she organized an intervention. Germany went on this twelve-step plan and came back all buff. First time I saw him, in fact, I was, like, whoa, who is that? Holland’s little brother?

We were close, America and me, when I was growing up. To be quite honest, I looked up to her. She’d been through a lot of changes, but you had to respect her. At long last she seemed to have found herself.

Which was why we were all so surprised when she took up with Iraq. Not that I have anything against Iraq, but he’s so immature! Still, she saw something in him. She’d gone out with him before, back in 91, but this time it seemed serious.

And for the first few months, it seemed like it was all going to work out for her. She lost weight. You’d see her jogging in the morning with her torch and that crown with the little spikey things on it, which I know seems so totally 1770s, but what can I tell you: somehow she made it work.

Then we started hearing rumors about her war, how Iraq was secretly seeing some theocracy behind her back.

And so, as we sat around her new house, me and all her old friends, we had to ask. Are you happy? Is this what you wanted?

America started crying. I don’t know! She said. It was nice at first, but now it’s just—a quagmire!

She looked at us in desparation. I feel so alone! She said.

And all her old friends were like, of course you’re not alone. Why do you shut us out? Why do you always have to do everything on your own?

We all had a big cry, and then we all hugged, and then we opened up the presents. Kenya brought some coffee. Belgium brought waffles. Ireland brought some whiskey, same as always. “Hey,” said Ireland. “Is it okay if we open this now?”

I don’t know what’s going to happen with Iraq, but I’m hoping America will realize we love her. There’s nothing she could do that would change that. But I don’t know. Sometimes she troubles me.

We were all about to leave, when who comes bursting through the door but Antarctica, drenched and frosty, and in two seconds she starts up with the business. “I’m melting!” she wailed, dropping an ice shelf in the foyer. “I’m coming to pieces!”

Well Jeez, Antarctica, I thought. You’re not the only one.