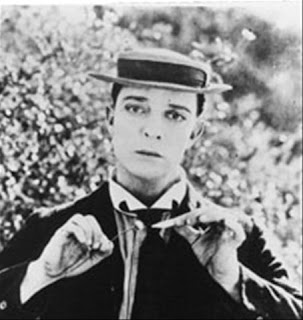 Jenny Boylan’s MAN OF THE HOUR for January 4, 2009 is Buster Keaton, American actor and director, a.k.a. “The Great Stone Face.”

But his greatest films are the early silents of the 1920s, including The General and Sherlock, Jr.

At the grimmest turns of my life, I have found Keaton’s films an irrepressible source of joy. There’s a lot to love about Keaton, but for me the greatest gem is that prune face of his, calm on the surface, but with the tenderest emotions flickering just beneath. He does more with a single gesture than most actors do with a page and a half of dialouge.

Here’s the opening of Sherlock, Jr., which includes an amazing scene involving a dollar bill found in the trash.

There’s lots of Keaton stuff on the web, the coolest of which might be Juha Takkinen’s list of Keatonia.

BUSTER KEATON, Old Stone Face, is the MAN OF THE HOUR!