Protest the Paritioning of Mordor!

Protest the Paritioning of Mordor! 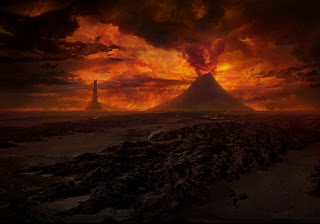 The U.S. led invasion, which led to the toppling of the Dark Lord, Sauron, has been bogged down since the liberation of the Land of Shadow, as insurgent orcs, Balrogs, and Fighting Uruk-Hai continue to battle American forces, and drink each others’ blood out of soup tureens.

Sauron, the one-time supreme leader of Mordor, has been awaiting trial since his capture by U.S. forces last year. At the time of his capture, the Dark Lord was found crouching in a hidey-hole eating beef jerky, apparently unaware that he was no longer supreme ruler of the Land of Shadow. “Hey,” said Sauron. “I’ve got Joe-mentum!”

The plan which the Secretary of State announced today calls for dividing Mordor into three “realms.” The northernmost land, stretching from the Dead Marshes to the far-off Sea of Nurn, would be renamed “Freedomville,” and administered by the majority orc population, and backed by troops from the European Union. The southern realm, renamed “Libertytown,” would be run mostly by cave-trolls, wicked Southron men, and a special “all drunken” brigade of the Russian Army.

The middle realm, “Happy-stan,” which includes the former site of the Dark Tower, Barad-dur, as well as fiery Mount Doom, would be turned into one giant Wal-mart, run by surly teenagers who have to “change the tape” whenever you approach the register.

At the time of the initial cease-fire in Mordor, it was hoped that the freed hobgoblins and giant spiders would “welcome U.S. troops as liberators.” Several years into the conflict, however, hope seems to be dimming for the transformation in Mordor that neoconservatives had hoped for, particularly along the firey plains of Gorgoroth, where the roads still have potholes filled with molten lava and these really creepy dudes with tentacles.

The problem was well summarized by a Mordor insurgent named Ugluk: “We don’t want democracy. What we really want is to drink blood from a giant soup tureen.”

The Bush foreign policy team seems caught off guard somewhat by the reluctance of the population of Mordor to embrace democracy.

“We figured once Sauron had been overthrown, the orcs and trolls would pretty much be ready for the American way of life,” said the U.S. Secretary of Defense. “Instead all they want to do is hit each other over the head with clubs and ride around on giant elephants. Quite frankly we’re a little baffled. We’re like: hello? Don’t you want to eat at an Arby’s instead? Become a contestant on ‘Mordorian Idol?’”

“These giant spiders and cave troll guys, they hate our freedom,” said the President. “They hate our country music and pork chops. Go figure.”

The U.S. led alliance, “Operation Mordor Happiness” has been precarious since the start.

In Gondor, King Elessar, Aragorn son of Arathorn was reported to have thrown up his hands at the whole mess. “Mordor, Mordor, Mordor,” said the King. “That’s all I ever hear about. What about my new health care plan? ”

King Eomer, over in Rohan, was said to be reconsidering his commitment of two thousand armed men on horseback to the fighting in Mordor, in response to criticism of the alliance with Gondor. “What,” said Eomer. “The Riders of Rohan are supposed to just keep riding around in a circle until a bunch of cave-trolls embrace democracy? Does that sound like a good idea?”

In Lothlorien, Elf-Queen Galadriel denounced both Sauron as well as the Bush policy. “Nobody hates the Dark Lord more than we do,” said the Queen. “But those who seek to control a place like Mordor will, in time, be turned to evil themselves. “ The Elf-Queen sighed. “Like Johnny Damon.”

Meanwhile, in the Land of Shadow, the war drags on.