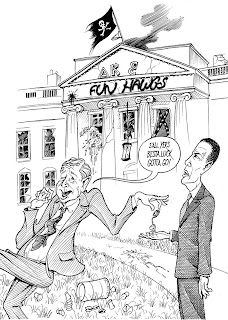 (The reduced image at left hardly does Tim’s work justice; and you surely should click here to see the piece in all its glory.)

If all goes according to plan like it never does, this will be my last overtly political cartoon.

I just got back from Inauguration last night. That crowd you saw on TV, filling the Mall from the Capitol to the Washington Monument? That was me! Through her unparalleled interpersonal and bartending skills my friend Melissa scored tickets to the inauguration for our whole group of friends. We left our HQ in Maclean, Virginia (thanks, Kristie and T.L., for your extravagant hospitality) at 5:15 A.M. to get the Metro into the District, and it was a good thing we did–we later ran into people who’d gotten into D.C. at 5 AM and still didn’t get into the inauguration. We spent several hours trapped in a vast, immobile crowd, waiting to get into the designated gate for purple tickets. At one point we saw Jesse Jackson and his entourage up ahead of us, trying to make their way through the crowd, on foot and just as fucked as the rest of us. I remembered then how he’d been overheard saying he was going to “cut [Obama’s] balls off” during the campaign, and I thought, Well, that’s what you get for talking shit about Obama—the same color ticket as Tim Kreider. (I read later that Jackson never got into the inauguration at all. Neither did Mariah Carey.)

Later an ambulance needed to get through the intersection, and the crowd, already packed as densely as a New York subway at rush hour, was pressed even more tightly against the barricades that hemmed us in. This was the only point at which we felt there might be even the slightest possibility of being maybe a little bit crushed to death. It was then that Melissa, who was raised to believe that there is always a way to sneak around the rules and avoid getting screwed along with the rubes, struck out away from the crowd and led us all to another approach to the gate, one where the crowd, though just as dense, was indeed shuffling slowly, intermittently forward. Despite the interminable wait, the frustrating absence of any communication or direction from anyone in charge, the agoraphobic closeness and toe-numbing cold, the people in D.C. that day were (a little halfhearted and desultory chanting aside) not ill-tempered or impatient but calm and friendly and humorous, joined together in a spirit of commiseration and fellow-feeling. I heard later that even with a crowd of almost two million people—the largest assembly in the history of Washington, D.C.—there was not one arrest. Melissa gave our extra ticket to a guy hawking Presidential T-shirts.

We did finally get into the Inaugural area, where every monument was coated and dripping with people. [Photos of the event, courtesy of Sarah Glidden, are posted on our photos page.] The trees were full of people, too, at whom the cops would periodically yell to get down. And the tree people would sullenly clamber down only to be replaced by more climbers five minutes later. I was reminded of Zacchæus, the short tax collector who climbed a sycamore to see Jesus preach. Never in my lifetime have I seen so many people strain with such intensity and passion to see a single man. (And when have you ever seen sportswear emblazoned with the name and face of a U.S. President?) It was a racially mixed, polyglot crowd, like a New York City street scene, strikingly unlike the homogenous mob of cruel-faced, desiccated coots in cowboy boots and their powdered, mink-enshrouded wives I saw at Bush’s first inaugural. Older black women were weeping openly, their faces embarrassingly beautiful to see; happy Asian couples were taking photos of themselves against the background of the crowd. All our trials were worth it to me to know that one of the millions of boos George Bush heard when his name was announced was my own. The most air-stillingly beautiful moment of the day was Aretha Franklin’s “My Country ‘Tis of Thee.” When she sang the line, “Land where our fathers died” a voice behind me shouted, “Yes, they did!” in churchly call-and response. Melissa and Sarah were weeping. I kept laughing for happiness. Obama’s speech was the only one we could hear well, so clear and resonant was his voice. I uttered a feeble “h’raay” when he mentioned “non-believers” (despite the incorrect nomenclature—we prefer to be called “The Damned”). It was a gesture of inclusion as unexpected and as moving, in its way, as his speaking the word “gay” in his acceptance speech. In the pause after an especially welcome or inspiring line, because of the sheer expanse of the crowd and the slow travel time of sound, you could hear the roar of cheers and applause rolling in oceanic waves two miles down the mall, like thunder or the sea.

After the inauguration I retreated to a mobbed and raucous Irish bar catty-wampus from Union Station where Van Halen was playing real loud and I scarfed down a plate of chicken wings and drank Jack Daniels out of a plastic cup for the first time in many years. It was there that I watched George W. Bush leave Washington, D.C. in disgrace. When he ascended the stairway to his plane the whole bar erupted with jeers and hurrahs. Everyone waved Good riddance, fuckboy, and raised their beers in ferocious toast. I gave the finger to the screen.

That night my friends and I retired to my Undisclosed Location on the Chesapeake Bay, well north of D.C. I built a fire in the woodstove and we all drank wine and made baked brie and salad and mushroom risotto. Late that night I put an episode of The Shadow on the turntable and we all passed out within minutes. The next morning, after breakfast, we all went for a walk on the beach, where we saw a couple of bald eagles flapping over the frozen cove. I played the Star-Spangled Banner on my pump organ before we left the cabin and headed back up 95 to New York City and home.

This morning I overcame my post-election indifference to politics, which borders on an active antipathy, and forced myself to read the Times, figuring that after eight years of relentlessly ghastly and depressing affronts to human decency I owed myself a little good news. I almost couldn’t take it. Already President Obama has signed executive orders closing down Guantanamo and the CIA’s secret prisons and overturning Bush’s efforts to block access to government records. Dennis Blair, Obama’s appointee for national director of intelligence, called for oversight and transparency in intelligence and said that counterterrorism must be consistent with American law and the Geneva conventions. He actually used the phrase “speak truth to power.” It is such a profound and pathetic relief just to hear anyone in the government say anything sane or reasonable or obviously true. Can it all really be this easy? As my cartoon illustrates, I know that the Bush administration has left the country a shambles, and it’s not just a matter of repair but of rebuilding, from the ground up, and it’ll take a long time. But it means so much just to know that the people in charge are smart and responsible and in touch with reality, listening to their soldiers and their spies and their scientists instead of plugging their ears and praying, that they respect the law and believe in democracy. It feels like the Dark Tower toppling, the statue of the Emperor pulled down, the snow melting and rumors of Aslan returned.

Most amazing of all, in a way, was the simple photo of President Obama sitting at the desk in the Oval Office. I looked at it for a long time.

You can see all of Tim’s many perverse and wonderful cartoons, and/or make a donation to The Pain comics by clicking here.